Women and Girls in STEM

Women have been historically underrepresented in STEM fields, and this is especially true for women from minoritized racial and ethnic groups. According to the National Science Board’s Science & Engineering Indicators 2018, however, the number of women earning STEM degrees and choosing STEM occupations has been increasing. NSF’s National Center for Science and Engineering Statistics reports that of the STEM degrees awarded in 2016, women earned about 50 percent of bachelor’s degrees, 44 percent of master’s degrees, and 41 percent of doctorate degrees. In 2016, women from underrepresented minoritized groups earned over half of all STEM degrees awarded within their respective racial and ethnic groups. Still, despite these gains, gender disparities in STEM occupations remain, particularly in engineering and computer science fields. This spotlight features early career scholars and DRK-12 projects working on solutions to engage and support women and girls in STEM fields. 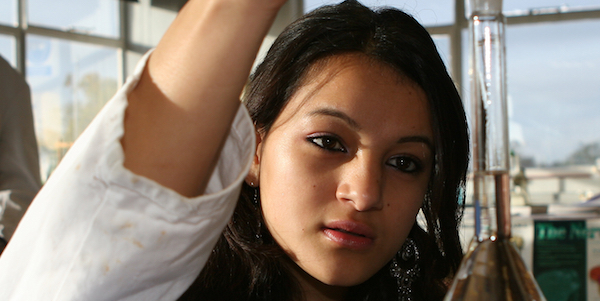 Two early career scholars offer their perspectives on and recommendations for engaging and supporting women and girls in STEM. Their research disrupts dominant narratives and provides opportunities to address broadening participation in exciting, innovative new ways.

Broadening participation for women and girls in STEM means attending to our positionality as researchers and nuancing our approach in ways that affirm their experience and account for the myriad connections of personhood and social life. In this blog, Benjamin discusses ways in which Intersectionality theory is critical to the future of STEM education research. Read more.

Fostering diversity and inclusion in STEM requires addressing structural and institutional inequities that are socially, culturally, politically, and historically defined. Drawing on Black Feminism and Intersectionality, Dr. Morton presents ways for STEM education researchers and practitioners to incite true change based on the voices, needs, and experiences of Black women in STEM fields. Read more.

STEP UP 4 Women is a national movement to empower high school physics teachers to inspire young women to pursue physics. High school physics teachers, in particular, have been found to be critical to inspiring young women who pursue undergraduate physics. In this project, two universities (Florida International University, Texas A&M-Commerce) and the two largest national organizations in physics (American Physical Society and American Association of Physics Teachers) will work together to mobilize high school physics teachers to inspire young women using evidence-based approaches/interventions. The approaches/interventions are based on physics identity and gender research, were developed with teachers, and have been field tested in multiple classroom contexts across the U.S. to ensure positive effects for students, particular women.  They include two Core Lessons and an Everyday Actions guide (www.stepup4women.org). In the Careers in Physics Lesson, students explore profiles of individuals with a degree in physics and then connect physics to their own personal career goals. In the Women in Physics lesson, students examine the conditions for women in physics, discuss gender issues, and make a class commitment to inclusive practice. The Everyday Actions guide focuses on explicit encouragement, reducing marginalization, and promoting recognition throughout the year. This project has the potential to translate physics identity and gender research to practice on a larger scale, substantially increase women’s representation in the field of physics, and lay the groundwork from similar methods for increasing the representation of women in other STEM disciplines.

Findings: In a study with 10 teachers across 8 states in Fall 2017, students (N=823) who experienced the lessons were asked about their future physics intentions (a construct including items on whether they can see themselves as a physicist, having a future in physics, majoring in physics, and/or pursuing a physics-related career) both before and after the lessons. The sample represented a wide range of contexts and student/teacher demographics with schools in urban New York City, Miami, and Los Angeles with primarily underrepresented students in STEM; schools in the rural South with primarily white students and a few underrepresented students in STEM; and suburban schools in Chicago, Seattle, Myrtle Beach, and Fort Worth with a varying mix of student demographics. Results revealed significant overall gains in students’ future physics intentions across both the Careers in Physics and Women in Physics lessons (p<0.001) (Cheng et al., 2018). In addition, the gains across both lessons were greater for female students (N=312). These gains were significant for Hispanic and Black women (N=117) (p<0.001) who are among the most marginalized populations in physics. The results suggest that the lessons will genuinely help high school physics teachers in leading this historic movement.

Theoretical Framework: The primary framework utilized in the STEP UP 4 Women research is science identity, particularly physics identity. Science identity has proven to be a salient framework for studying persistence; in terms of disciplinary identity, research has found that students who develop such identities are significantly more likely to plan careers in those disciplines (Hazari et al., 2010; 2013). The theorized framework for physics identity we employ includes dimensions of physics performance beliefs, competence beliefs, interest, and recognition. The framework employing these theorized dimensions has broadly been used both qualitatively and quantitatively (e.g. Carlone & Johnson, 2007; Godwin et al., 2016; Hazari et al., 2015). Physics identity measures used in these studies have been found to be reliable and valid and are strong predictors of students’ physics-related career choices. In addition to physics identity, we used theoretical insights from Goal Congruity, Values Affirmation, Growth Mindset, and Figured Worlds Theory in the development of the approaches/strategies.

CAREER: Changing the Landscape: Towards the Development of a Physics Identity in High School (PI: Zahra Hazari)
Learn more: Publications and Resources